The Brazilian e-commerce industry is growing steadily. Throughout the recent years of economic recession, the country’s e-commerce market continued to registered growth both in revenue and number of consumers, unlike the traditional retail segment. Brazilian consumers are not only buying more from local e-commerce websites however, recent studies by PayPal and Ipsos, as well as Ebit, indicate that each year more and more Brazilians purchase from international websites.

The numbers place Brazil as an outstanding opportunity for international e-commerce businesses that sell cross-border into the country. Nearly 50% of all Brazilian online shoppers carried out cross-border purchases in 2017 and 8% of them chose to buy exclusively from international websites, be it for lower prices or a wider range of products available.

Merchants who decide to explore the opportunities Brazil has to offer must consider several elements when setting up a successful cross-border operation. We have already shared our tips for those thinking about expanding to Brazil, but there is one point that is often overlooked: currency exchange.

Currency conversion rates and international settlement will most likely have significant impacts on businesses’ profit margins. In Brazil, a common practice among players providing international settlement and remittance is to offer the so-called “tourism dollar” rate. However, in doing so they end up creating a hidden fee model that raises the price and risks related to currency fluctuations. Therefore, beware of the tourism dollar rate.

A Background of the Tourism Dollar rate

We have already given a more thorough background of the tourism dollar rate in a previous article. In short, the tourism dollar rate was created by the Brazilian Central Bank in the late 80’s in an attempt to regulate currency exchange transactions carried out in the black (or parallel) market. It consisted of a floating exchange rate that would vary accordingly to supply and demand, unlike the rate known at the time as “commercial dollar”. In 2005, however, the changes in the Brazilian currency exchange market merged both the commercial and tourism segments, creating a unified exchange market based on a floating rate. From then on, the tourism dollar rate ceased to exist as an official exchange rate.

Our Senior Account Manager, André Almeida, highlights that “both terms are still frequently used in Brazil to express different types of exchange operations and rates.”  While the commercial dollar is associated with business transactions such as import and export or money transfers, the tourism dollar term is still used for exchange operations related to buying and selling currency for international travel. “Some players take advantage of this and it is natural for international merchants to be confused when presented with the tourism dollar rate for their remittances”, he adds.

Nowadays, the average official interbank exchange rate for the day is defined based on all the transactions carried out in the marketplace. The Brazilian Central Bank publishes the official rate on its website daily.

André carries on: “it is important to highlight that the exchange rate provided by the Brazilian Central Bank is to be used only as a reference for calculating the rate to be adopted.” Each player, be it a financial institution, currency exchange broker or payment provider, can define their own rates based on that. “The standard would be to apply a small spread to the official rate to cover any related costs. However, some players use the term ‘tourism dollar’ to justify an inflated exchange rate”, he continues. Such spread often increases the exchange rate up to 7%”, according to a study conducted by Melhores Destinos. 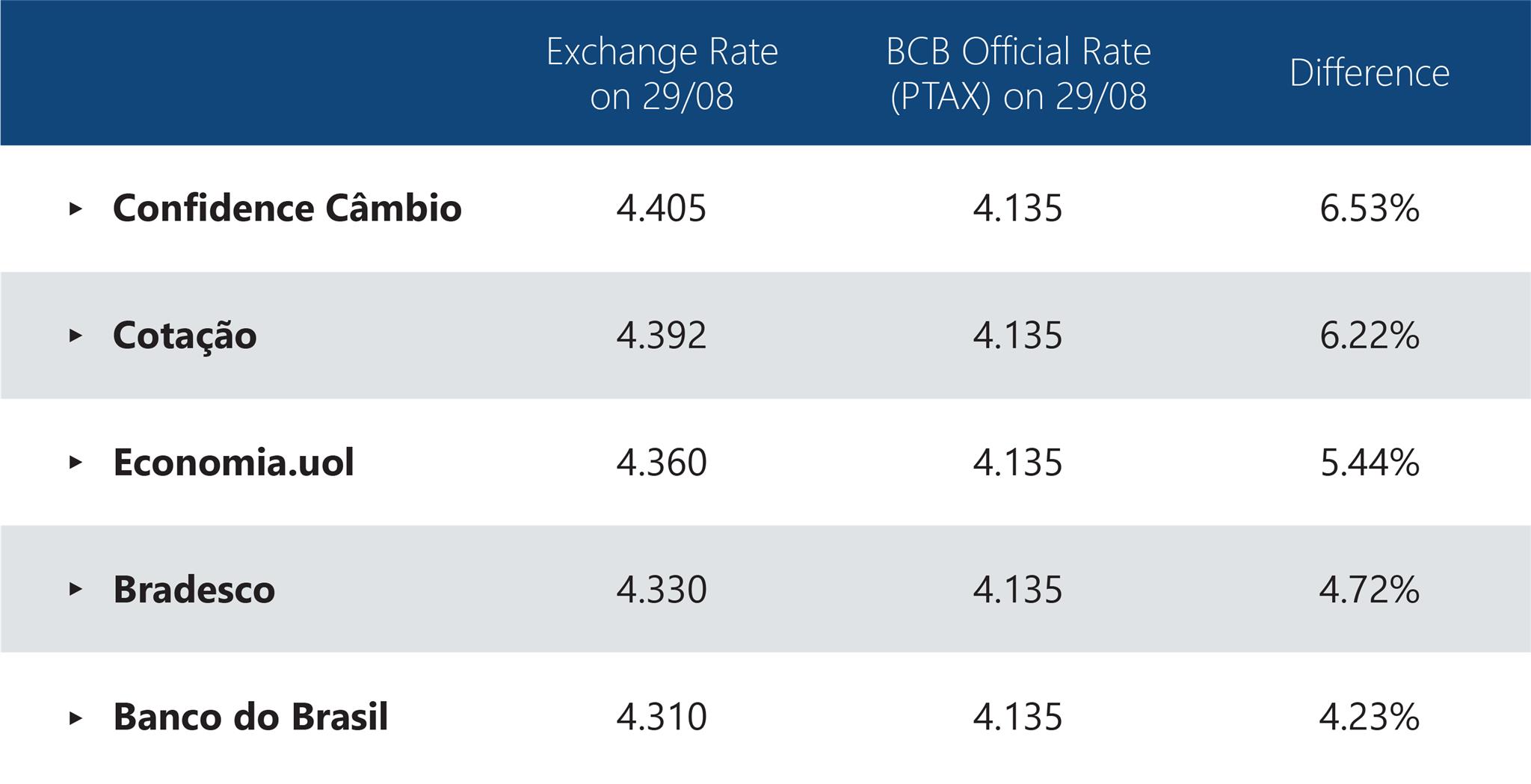 It is not too difficult to observe this trend. Last month, we compared the exchange rate used by two of the main Brazilian banks, Banco do Brasil and Bradesco, as well as two currency exchange offices, Confidence Câmbio and Cotação, and the “tourism dollar” rate published at the popular portal Economia.uol against the official rate published by the Brazilian Central Bank. The results are quite clear and speak for themselves. The lowest spread applied on 29th August, the day we used for the comparison, was 4.23%, with Confidence Câmbio adding 6.53% to the commercial rate.

As with any part of the business operation, having a clear vision of associated costs is crucial. André noted that “international merchants generally focus on the impact that payment processing fees have on their profit margins. However, transparency is essential for those who wish to have full control over all the costs involved with their operations in Brazil. When payment service providers fail to inform the spread added to the exchange rate used, hiding behind the term tourism dollar, they end up creating a hidden fee model that considerably increases the overall costs of payment processing and is all but transparent”.

Because transparency is one of our core pillars at PagBrasil, all our international merchants are informed about the spread we add to the official interbank rate published by the Brazilian Central Bank. “We are proud to practice a cost-efficient exchange rate model. In a market where exchange rates can vary significantly from one player to the another, creating a speculative environment, we strongly recommend businesses to consider this element when comparing payment providers. Beware of the tourism dollar rate and its hidden fees, as they can end up eating up your profit margins.”, concludes André.