As sales volumes in the Brazilian market grow, foreign exchange rates play an important role in determining the amount international merchants receive in their respective currencies. Some banks and companies offering international payment processing services use an exchange rate known in the Brazilian marketplace as “tourism dollar” instead of using the official rate. This practice unnecessarily increases the cost of currency conversions; thereby significantly reducing the profit margins for the merchants.

Over the course of its history, Brazil has been through a series of currency exchange crises. This has led its government to implement limits and require paperwork for purchasing foreign currency, thus fostering the development of a black exchange market, the so-called “parallel market”.

In the 1980s, exchange restrictions and controls became stricter, and the parallel market became stronger. This is why, in December 1988, with the intent of regulating the transactions carried out in this market, a floating exchange rate market segment was created in Brazil, in addition to the official market (commercial dollar), which became known as the “tourism dollar”. The exchange rate in this new segment floated according to offer and demand, without the Central Bank of Brazil intervening there directly, keeping the same dynamics as the “parallel market”. However, in 2005 both segments – commercial and tourism – were pooled together and Brazil thereon had only one legal currency exchange market featuring a floating rate, and the “tourism dollar” no longer existed as an official rate.

Despite these changes, some players still use both terms “commercial dollar” and “tourism dollar” to display their different rates. As a result, the “tourism dollar” is used for operations involving buying and selling currency for international travel, and the “commercial dollar” is used for business transactions, such as import/export and funds transfers. 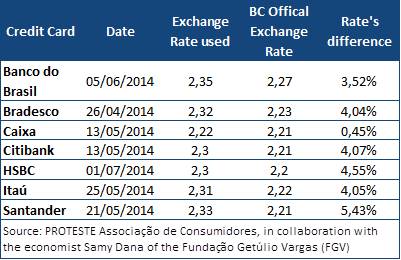 Every day the Central Bank of Brazil gathers and publishes on its web site the average official exchange rate for that day, calculated on the transactions carried out in the marketplace. Nevertheless, this rate is not enforced; it is merely a reference for calculating the rate to be adopted. Each financial institution may have its own rates, as shown on the chart here, presenting a sample of the rates adopted by different banks for computing their credit card invoices. Likewise, in foreign trade transactions, there is no rule on adopting a specific exchange rate, since companies are free to choose their bank, foreign currency broker or international payment processing provider offering them the most advantageous exchange rate. 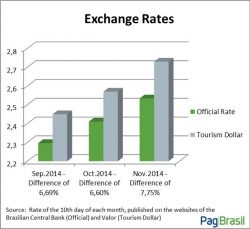 PagBrasil, however, offers its clients a competitive and transparent exchange rate, based on the official interbank rate published by the Central Bank. The difference in exchange rates can be quite significant, and this is why upon selecting a payment processing service provider, international online merchants should compare currency exchange rates, in addition to service fees.