After a long period of extensive economic and political crises that have affected the Brazilian economy, the country showed its first signs of recovery in the first half of the year. Such recovery has fueled the consumer market and had positive effects on the e-commerce segment. As a result, the Brazilian e-commerce market registered growth both in transactions and revenue in H1 2017 in comparison to the same period in the previous year, according to the recently launched Ebit Webshoppers report.

The Brazilian e-commerce market reached a total revenue of BRL 21 billion, a growth of 7.5% against the volume of the first half of the previous year. 25.5 million consumers made at least one online purchase during this time, an increase of 10.3%. In addition, the average transaction value also jumped from BRL 403 to BRL 418.

It’s worth noting that, for the first time since Ebit started monitoring the Brazilian e-commerce market and sharing the results via its Webshoppers report in 2001, the total of transactions broke the 50 million barrier in the first half of the year. This represents an increase of 3.9% when compared to H1 2016.

Furthermore, the report indicates that the m-commerce segment continues to grow at a fast pace. During H1 2017, there was an increase of 35.9% in purchases made on mobile devices. In addition, smartphones and tablets already represent a quarter (24.6%) of all e-commerce transactions in Brazil. When comparing the growth of the m-commerce segment with the entire e-commerce market, the accelerated growth rate is evident: 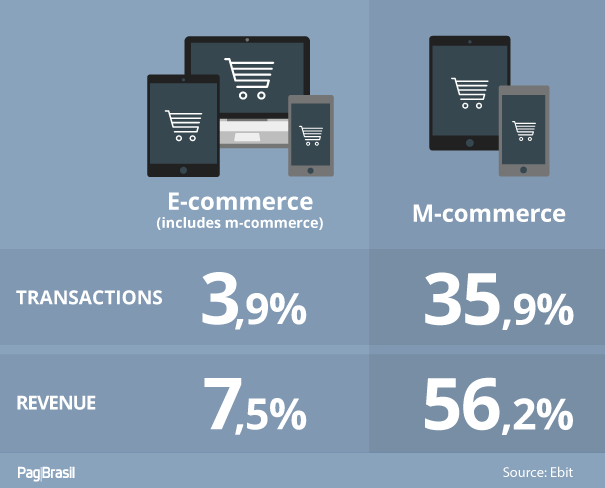 Another highlight refers to consumers’ behavior when it comes to paying for purchases. Although used to paying in installments with credit cards, 48.2% of Brazilian buyers opted for one-off payments, up from 42% in H1 2016. However, when choosing to finance the purchases, they prefer to pay in 4-12 installments (32.4%) rather than in 2-3 installments (19.4%).

Forecast for the Year

The first half of last year was responsible for the first negative result for the Brazilian e-commerce market, with a decrease of 1.8%. Although H2 2016 had better results, the YoY growth for 2016 stayed below the two-digit mark (7.4%).

The good results for H1 2017, in addition to a growth perspective of 12% to 15% for the second half of the year, fueled by dates such as Dia das Crianças (Children’s Day), Christmas and especially Black Friday, make it possible for Ebit to forecast the growth for this year. Given the results for H1 and the predictions for H2, Ebit foresees a growth of 10% for the e-commerce market in 2017. This estimation is slightly below the 12% indicated in the previous edition of Ebit’s report. However, it is justified by the fall in e-commerce prices, that have experienced a decrease of 5.38% in the last 12 months. Such a decrease has a direct impact on the average transaction value, which was expected to grow 6.5% in 2017 but has been readjusted to 3.3%.